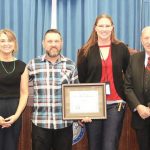 “In service to others,” become a life saver and then a life’s calling for U.S. Navy veteran, Shane Whitecloud. Whitecloud shared his story with Nevada Appeal reporter, Steve Ranson about a fluke that made him join the Navy instead of the Air Force at age 17 – just out of high school. He also shared some tough emotions about the bitterness and anger that enveloped him, starting with a Navy accident and then dealing with the aftermath as a survivor of military sexual trauma. Whitecloud admits this kicked off a downward spiral that involved fights, drugs, trouble with the law, and thoughts of suicide. Now, more than 20 years later, Whitecloud said he found healing, found himself and found his lifelong mission in helping his fellow veterans in need.

In a special ceremony at the Old Assembly Chambers, Whitecloud was recognized and honored as Veteran of the Month.

You can read the full article about Whitecloud’s life and work by clicking here:

Shelley Grim-Brooks was also selected as Veteran Supporter of the Month for the month of October. Grim-Brooks has volunteered with NDVS for several years providing countless hours as a proofreader for numerous NDVS documents, including the newsletter. In her past, Grim-Brooks has used her proofreading talents to support the Nevada State Senate, proofreading session journals and other documents during Nevada’s legislative sessions.

Both were nominated and then selected by the Veteran Service Commission for recommendation to the Governor to receive this honor and recognition.

If you know of a veteran worthy of this award, click here:

If you know of a veteran supporter, click here: