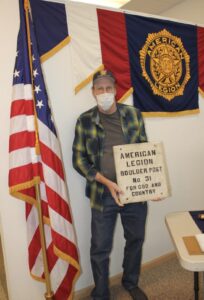 (Boulder City) — Boulder City has a long history of supporting veterans. The identifying number of the local American Legion organization is a testament to that — it’s called Post 31 because 1931 was the year construction on the Hoover Dam began and the original workers came to be called “31’ers.” For many years the post owned its own building and held a collection of historic memorabilia telling the story of the first veterans who established the local group. Much of the collection also reflected the growth of Boulder City itself, which began as a geographical area owned by the federal government as the dam was being built. But as time moved on, so has the post home.

Post Commander Glenn Feyen explained that the historic building had to be sold. “The answer is real simple, he said COVID-19.” Our primary source of income was hall rentals and such, and we could hold some fundraisers periodically. That would off-set the costs, payment of insurance, gas, electric and all that.” But with the pandemic restrictions placed on individuals having to keep their social distance and wearing face masks, the Post had no way to control anyone who rented the hall. “We didn't have the manpower to do that,” Feyen said, and added it would have cost too much to hire a service. “So it just came down to a matter of finances. It was a tough decision. But there was more money going out each month than there was money coming in, ”he said.

When the building closed escrow, the Post moved to a modern store front at 1641 Boulder City Parkway, in the town’s Red Mountain Plaza. In addition to membership meetings on the first Tuesday of each month, it continues to be open for regular social gatherings. On Thursday mornings, the members assemble for coffee and conversation. Profits on the sale of the real estate are currently being used to operate the Post and Feyen adds, “to reestablish ourselves in a new place. Hopefully somewhere down the road not too far, we’ll be able to buy another building.”

An Army veteran in the 47th Engineer Battalion Combat Airborne at Fort Bragg, North Carolina, Feyen enlisted from his home in Minnesota. During most of his service time he was assigned as the driver for the battalion commander. After the Army, he worked in Arizona, but when retirement came he considered Boulder City where, for many years, he had been visiting family members who live in the community.

The Post has 140 members, and includes veterans from WWII, Korean War, the Vietnam War and a few younger members who served in the Middle East.

All of the Post 31 memorabilia, vintage photographs and ephemera have been saved. Some of it’s history is openly displayed at the new Post. The majority of it has been stored and determinations are being considered for its best use.