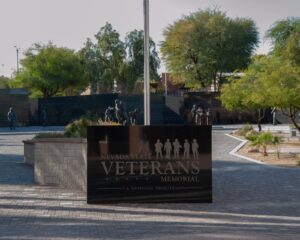 Nevada Department of Veterans Services hosts this page as a tribute to the Nevada Veterans Memorials found across the great State of Nevada.

Among the more notable (and known) memorials are:

The Nevada State Veterans Memorial, Las Vegas serves as a reminder to all that we will forever honor the heroism and spirit of those who have and will serve in our Nation’s military. Now constructed, the memorial is located on the grounds of the Grant Sawyer State Building, just north of downtown Las Vegas.

On Nov. 9, 2018, hundreds gathered outside on the Capitol Complex grounds in Carson City to dedicate Nevada’s Battle Born Memorial. There are 895 Nevadans on the memorial that made the ultimate sacrifice, dating back to The Civil War and to present day.