The groundwork to the War in Iraq (Operation Iraqi Freedom) began in October of 2002 with a Congressional resolution authorizing the U.S. President to go to war to disarm Iraq. In November of that same year, the UN Security Council adopted Resolution 1441, giving Iraq a final chance to comply. Military action began in March 2003. By April 2003, coalition forces took Baghdad. The White House declared the regime gone. By December of 2003, Saddam Hussein was captured. He was eventually tried and put to death. In November of 2004, the US and the new Iraqi forces battle insurgents and declare Falluja liberated. The number of US forces continues to increase from 2004 through 2008 when US troops reductions began. In September 2010, Operation Iraqi Freedom is renamed Operation New Dawn to reflect the reduced US troop role. The Iraq War ended in December of 2011, marking an end of the almost nine-year war. 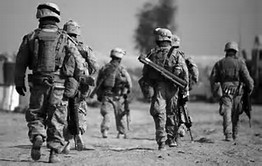