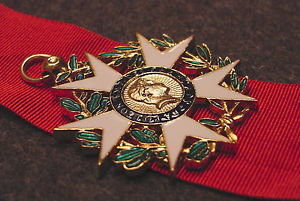 By Chuck N. Baker
The melodic patriotism of “God Bless America" intertwined with the French lyrics of “La Marseillaise." The dual harmonies drifted through an area where a group gathered for two presentations of the French Legion of Honor (Legion D’Honneur).

William “Dean" Whitaker served in the Army Air Corps and William Grant served in an Army infantry division during World War II. Both men received French Legion of Honor medals during a special ceremony held in Las Vegas last month. While it’s been more than seven decades since WWII ended, the French people and their government remain strong in their commitment to thank, honor and recognize the men and women who helped them during their time of need.

The Legion of Honor medal was devised when the French Revolution ended, November 9, 1799. Napoleon Bonaparte ascended as France’s First Consul, replacing Louis XVI. He ordered a medal be designed that could be given to anyone of all ranks and professions for outstanding achievements in military or civilian life.

Grant, a Pittsburgh native, enlisted in the Army in 1943 and served in Europe with Company F, 2nd Battalion, 60th Infantry, 9th Division. He took part in several battles, including an operation that began with 180 soldiers but ended with just 11 men, including two officers. Grant was then placed in charge of a machine gun squad and his actions earned him a Bronze Star for gallantry. He was later wounded in another battle in Germany’s Hurtgen Forest and received a Purple Heart. Later, he fought in the Battle of the Bulge and earned numerous additional medals.

Whitaker was born in Los Angeles. While attending gunnery school in Kingman, Arizona, Whitaker was sent to the Las Vegas gunnery school to take part in a marksmanship competition where he received a silver ring as First Prize. After aviation training, he was assigned to the 398th Bomb Group in the 603rd Squadron of the Eighth Air Force. During service as a bombardier and navigator in a B-17 over France, he came under heavy enemy fire, but managed to land safely. He took part in 18 missions. In his last over Germany, he was forced to parachute from his plane and landed directly in a POW camp, which became his home for seven months before the war ended. Some of his decorations include the Purple Heart with four oak leaves, WWII Victory Medal, Operation Overlord Medal, Presidential Unit Citation and a POW Medal.

Whitaker addressed the crowd and thanked the French government for his award. He recalled that he was only 19 years of age when the airplane he was in was shot down. But much later when he saw American troops raise the stars and stripes, he exclaimed, “What a day!” Grant thanked everyone for his award and said, “Too many people forget what WWII was like.” He bemoaned the fact that today American schoolchildren are presented with only one-half day of education learning the history of World War II. “Children in high school think we started the war!” he said, In his remarks. Governor Sisolak added to Grant’s comments by stating, “We need to do more to educate our youth about World War II.”

If You Know of a Veteran Deserving of this Medal…

In helping to never forget what American soldiers accomplished in France, Emcee Bob Reed spoke to the audience. He asked that if anyone knew of living U.S. veterans who saw action in France (on the ground, in the air or on water), to contact him at usveterans@cox.net.