Home / If It’s Veterans and Military Day, It Must Be Carson City

If It’s Veterans and Military Day, It Must Be Carson City 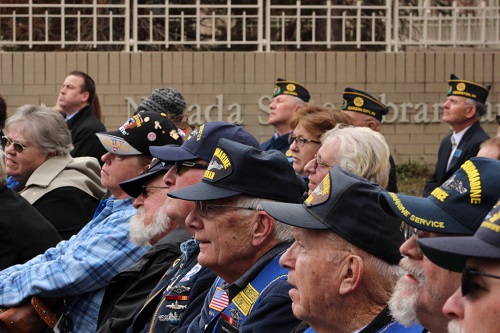 By Chuck N. Baker
(Carson City) — Every two years the Nevada Legislature meets to conduct the business of the State. When lawmakers are in session, Nevada law carves out the third Wednesday of March as Veterans and Military Day at the Legislature (VAMDAL). It is a special day dedicated to recognizing and honoring Nevada’s veterans, military members and their families. The day is hosted through a partnership by NDVS, the Nevada National Guard and the United Veterans Legislative Council.

VAMDAL began with an opening ceremony outside on the grounds of the Legislature with welcoming remarks by Kat Miller, Director of the Nevada Department of Veterans Services. The Northern Nevada All Honor Guard/Color Guard presented the colors and Navy veteran Shane Whitecloud sang the “Star Spangled Banner.” Air Force veteran Bill Bauman led the Pledge of Allegiance and Nancy Johnson of the Sierra Nevada VA Medical Center presented the invocation.

Miller noted that VAMDAL, “is an opportunity for our military, our guardsmen and women and our veterans to interact with Nevada’s elected leaders. This day helps focus attention on current legislative bills affecting veteran issues.” She introduced Senate Majority Leader Nicole Cannizzaro who said she was honored to “play even a small part” in VAMDAL. Commenting that, ”It’s a beautiful day in Carson City, it’s not raining.” There was a 70 percent chance of rain predicted that day! She went on to say, “We have to make sure veterans receive the benefits they’ve earned.” She praised the Nevada National Guard adding, “Members are always there to protect us.” Praise was also given to Women’s History Month as she noted females are the fastest growing segment of the veterans’ community. Legislation that Cannizzaro sponsored includes a bill to improve support to those who have experienced military sexual trauma; and another directs State agencies to properly identify veterans by asking “Have you ever served?” in place of “Are you a veteran?”

Assembly Speaker Jason Frierson took to the podium and praised the Nevada Legislature for its current female majority. He noted women have made great strides in military service too. He said women are now being assigned to jobs that in the past were assigned only to men. While he admitted, “we still have a long way to go,” he added that great progress has made within the State. He noted that the Women Veterans Advisory Committee has worked to assist female veterans and closed his remarks by saying, “It’s important that we recognize and appreciate all military personnel and veterans.” Frierson has supported bills that solidify Veterans Courts and one that creates employment preferences for veterans and spouses of veterans killed in action.

In introducing Governor Steve Sisolak, Miller quoted remarks he made at his inauguration in January. He verbally painted a picture of the people of the State by describing residents as, “One Nevada” stating “We hail from all walks of life, but we come together, over and over again, to make one another better.” He had emphasized, “We have each other’s backs.”

At the podium, Sisolak said veterans are the “real VIP’s” in the audience. Among other legislation, he said that he has proposed increasing the State budget to allow for the hiring of additional Veterans Service Officers. And he said Nevada is, “leading the charge to help find a solution to veteran suicide.” He added that the State is helping veterans by increasing services that will lead to a smoother transition from military to civilian life. Sisolak also prevailed over the awards for Veteran of the Month and Veteran Supporter of the Month.

Before Miller gave the closing remarks, the Governor signed an executive order establishing the State of Nevada Veteran Peer Mentor Group. This group will help ensure veterans have the support they need to successfully transition to civilian careers   He asked Nevada’s Veterans Coordinator for the Department of Human Resources, Doug Williams, to join him at the signing table.

Next Governor Sisolak presented a proclamation designating the week of March 17-23 as Women’s Military History Week in Nevada. Miller explained to the audience that women have been critical to the defense of the nation. Especially women veterans of an earlier generation, who often experienced challenges as they attempted to adapt to systems, equipment and policies not designed for them. “And yet these amazing, talented, courageous and innovative professionals persevered.” Miller also gave credit to military men, noting that success for many women was directly attributed to a male leader who gave the ladies a chance. “Therefore I want to take a moment to thank all the amazing military men — battle buddies, drill sergeants, squad leaders, first sergeants, company commanders [and others] who made sure that everyone on their teams were valued. . . Let’s give a round of applause for these amazing male leaders!”

Miller then asked all women veterans and female active duty personnel to join the Governor up front as he presented the proclamation to Retired Colonel, Dr. Anne Davis, current Chair of the Nevada Women Veterans Advisory Committee.

Lastly, Sisolak presented a proclamation declaring March 29 as Vietnam War Veterans Day in the State. Those who served during the Vietnam era in-country or elsewhere were asked to come to the stage. Vietnam Veterans of America Chapter 388 of Carson City member Tom Spencer, and Vietnam Veterans of America Chapter 989 of Reno member Linda Dickerson, were jointly presented with the proclamation by the Governor.

Later in the day, veterans were asked to take part in special events inside the Legislative Building in both the Assembly and Senate. Several elected officials in both chambers stood and made impromptu remarks as they introduced constituents and/or made statements in support of veterans. In the Senate, Senator Pat Spearman stood and read from a collection of soldier’s poems. The verse of one poem read in part, “With a hand upon my heart, I feel the pride and respect; my reverence is revealed in the tears that now stream down my upturned face, as our flag waves above you, in her glory and grace.” In the Assembly, Assemblyman Chris Edwards introduced his guest, First Lieutenant. (Ret.), Doris Howard, who served as a nurse in the South Pacific during WWII. Still filled with spirit and joie de vivre, she smiled to loud applause as Edwards revealed that the senior Howard “had celebrated her 39th birthday 60 times.”

After the political introductions, all were treated to a BBQ lunch on the sun-lit legislative grounds. It was a well-fed meal after a cloudless day of reverence for Nevada’s veterans.