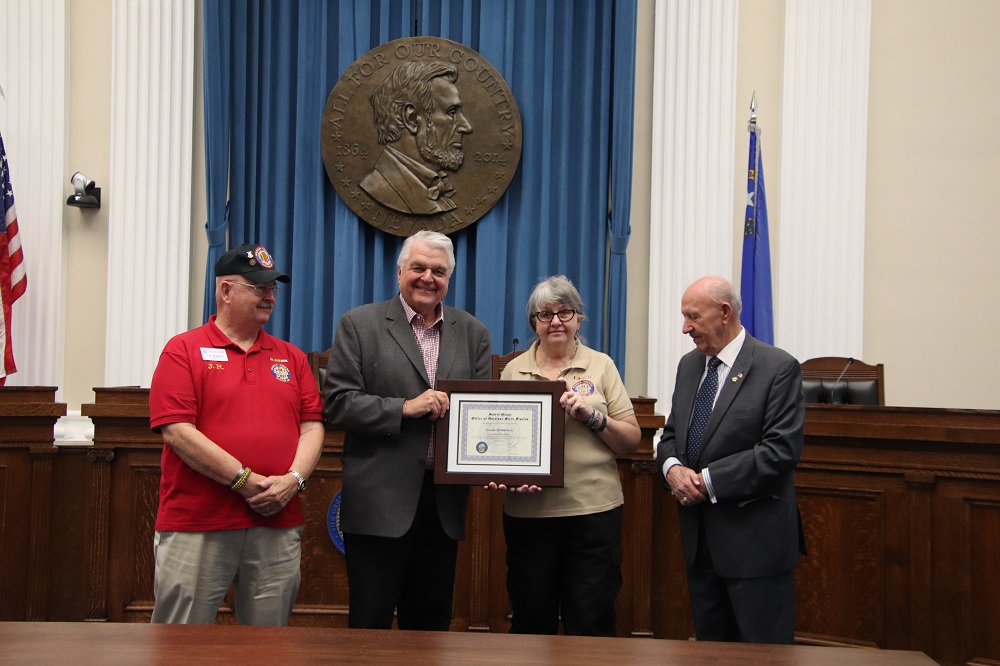 By Chuck N. Baker
In a ceremony inside Carson City’s Old Assembly Chambers, Linda Dickinson was honored as Veteran of the Month during a special ceremony on September 6, 2019.

Linda is the immediate Past President of the Sierra Nevada Chapter 989 of the Vietnam Veterans of America. She recently completed four terms as Chapter President (April 2015 – April 2019). Prior to her election, she served as Chapter Secretary. During those years, and today as a Board Member, she continues to support various local veteran organizations and various veteran-related issues.

She has been the strong presence at the helm of VVA 989, which contributes to the community in many ways. VVA Chapter 989 supported various aspects of the opening of the new Northern Nevada State Veterans Home in Sparks. VVA 989’s Color Guard participated in the ceremony renaming of the street in front of the new home to Battle Born Way.

Dickinson and members of the Chapter were there for the “soft opening” of the new home in late 2018. She and Chapter members worked as docents giving tours of the facility and serving as parking/shuttle attendants as well.

As a licensed nurse, Linda continues working with the Northern Nevada State Veterans Home as chairperson of the “Independent Advisory Board.” The board ensures all veterans at the new facility are properly cared for, remain safe, and live in a healthy environment.

Linda served, and continues to serve, as the Sierra Nevada Chapter’s Delegate to the Nevada State VVA Council and has often traveled “on her own dime” to attend State conferences on issues such as Agent Orange, PTSD and suicide prevention.

As 989 Chapter President, Linda was ultimately responsible for Chapter participation, both physically and financially, at such things as: