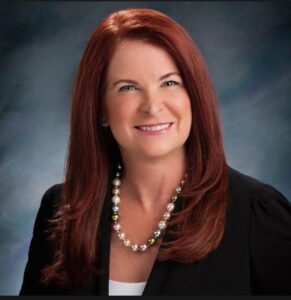 (Henderson) — As individuals and as a group, veterans today have been honored for the service they have rendered to the nation. Often families of those veterans are also honored. But a local group of supporters has focused in on two specific categories of family members — mothers and fathers of veterans. And the first individual to be so honored in that select group was none other than Debra March, the Mayor of Henderson.

Peter Palivos, chairman of Voice of the Veteran located in Southern Nevada (there are similarly named organizations elsewhere) said that he met with a number of support groups and discussed how parents play such a large part in raising children to be patriotic. “It takes a good mother and father to raise a good veterans. When they raise their children to love America, then we love America,” he feels.
March received the Veteran Mother of the Year award recently at Henderson’s Purple Heart Plaza, a large public area in the city’s downtown area. She said in part, “Today, I had the honor of accepting the Veteran Mother of the Year award from Voice of the Veteran. I also had the great privilege of accepting the Veteran Hero of the Year award on behalf of my son David Price — who I am incredibly proud of each and every day.” While serving as an Army sergeant in Iraq, Price distinguished himself in battle, receiving a Purple Heart and a Silver Star. Full details of his exploits were published in a book entitled “Heroes Among Us: Ordinary People, Extraordinary Choices” by author John Quinones. Palivos described Price’s actions as, “heroic. His unit was under attack, and he put it down. I really believe it takes two to create a war hero, a mother and a father.” It was that upbringing that contributed to Price’s patriotism, Palivos is convinced.
It was the attack on the United States on 9/11 that prompted Price to enlist in the Army. At first March was hesitant about his decision, but Price explained that he felt compelled to join and defend America. March agreed and told him, “I support your decision 100 percent because I love America the way that you love America.”

March said that Voice of the Veteran had looked into her long-time involvement with veterans causes, including providing support to Henderson’s development of Purple Heart Plaza and embracing other civic honors for veterans. The group also determined that March’s mother was a Navy veteran and her father was in the Army Air Corps, both during WWII. “He was stationed at the military facility in Las Vegas that later became Nellis Air Force Base,” March said. “And also, Voice of the Veteran was aware of my son’s service as an Army Ranger.”

All of the above contributed to March being named Veteran Mother of the Year. She was emotionally moved when she received the award. Palivos added, “We had about 30 people or so at the ceremony, including 10 or 15 Purple Heart guys. It was very touching to see the emotion of the war heroes, and Debra had tears in her eyes. She said she was very humbled and told the guys, ‘I felt It was my duty to raise my son to love America.’” Price is currently a wild life biologist in Idaho, still serving the government as an employee of the Bureau of Land Management.

When the COVID-19 pandemic is over, Palivos said he will be working with local high schools to bring veterans from the Korean, Vietnam and Middle East wars into the classroom and have them explain about the heroism of America’s men and women who served the nation. “It’s history,” he said. Not only the history of the military, but the history of the mother’s and father’s who brought up their children to support American values.