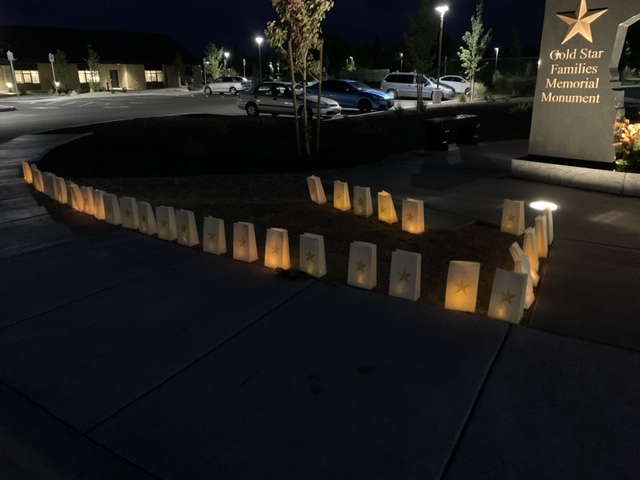 As a result, the Foundation partnered with the Nevada Department of Veterans Services to host the first-ever, Gold Star Luminary event in front of the new Gold Star Families Memorial Monument, located on the grounds of the new Northern Nevada State Veterans Home in Sparks.

Gold Star Family Day is a national day of recognition held on the third Sunday of September each year. This year, the recognition fell on September 29th. It recognizes the tremendous burden Gold Star Families bear due to the loss of a loved during service in the U.S. military. Lighting a luminary lets these families know they are recognized, honored and not alone.

This ceremony began at 6:00 p.m., underneath the setting sun. Gold Star Family members and others lit and then placed battery-operated tea candle inside individual luminary bags that had been placed in front of the memorial. The glowing luminary bags provided a soft light against the black marble of the memorial.

Gold Star Mother’s Day was designated by a joint Congressional resolution in 1936. In recent years, it has evolved to be known as Gold Star Family Day. Each year since, the day has been observed by presidential proclamation.