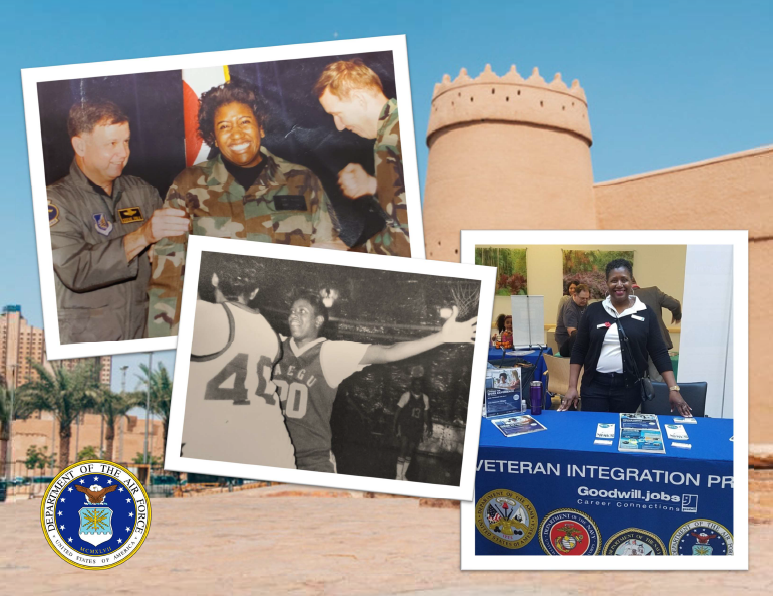 U.S. Air Force Veteran, Nina Ridgeway, joined the military right out of high school in the 1980s. Inspired to enlist by a brother and cousin who served, she realized the men in her life were traveling, learning about exotic places, and experiencing a kind of growth and freedom she wanted for herself. Over her 20-year career in the military, she achieved the rank of Master Sergeant. Some of her duties included morale, welfare and recreation; hotel and lodging; and food service. One of her favorite jobs was working in the fitness center, organizing and playing in sports tournaments such as basketball and volleyball. While serving, Nina developed as a leader and was drawn to mentoring the people she supervised.

Nina's talent for serving others and making a positive impact on their lives led her to Goodwill Industries of Southern Nevada in Las Vegas where she is currently the Director of Career Center Services. Through her dedication to service, she helps people find gainful employment and make successful transitions from the military into the civilian workforce. In addition, Nina has brought together other service organizations in the region by creating the Southern Nevada Veteran Community Engagement Board (SNVCEB) where partnerships foster access to resources.

Nina has three kids in their 20s and a granddaughter who is 9. One daughter graduated from the University of Nevada, Reno this spring. She loves to travel and last year was able to go on a European cruise, exploring Spain, France, and Italy.

1. Who was your greatest mentor during your time in the service and why? What did you learn from them that you still use today?

When I met Alonzo Willey, we clicked right away. He was tough but had a talent for computers and believed in efficiency. I liked his no-nonsense approach to solving problems. He helped me step into my role as a leader and inspired me to take it to another level. He was very intentional in the way he guided and nurtured me in his ideas regarding efficiency, which I still use today. I brought his no-nonsense leadership style with me into my work as an employment specialist at Goodwill Industries. For instance, when I met with a new client who was experiencing the crisis of unemployment, I let them vent for a specific amount of time; then I would focus them on the problem at hand so we could use our time the most efficiently and to their ultimate benefit.

2. In the military, during extreme experiences such as weather, combat, problems, etc., what creative solutions did you employ? How did you turn these challenges into positive outcomes? How does your problem-solving experience in the military impact the way you approach challenges today?

When I was deployed to Pakistan, we were restricted to the base because the Taliban were a serious threat. I worked in Services, and typically you don’t get time off because it’s essential to operations (i.e., food, lodging, recreation, etc.). We worked all the time (almost 24 hours, 7 days a week); however, when I managed a day off for the team, it improved morale and demonstrated that someone cared about them.

Now while we’re all stuck working from home because of COVID-19, it feels like the same kind of thing. People are under constant pressure and circumstances are outside of my control – parents are homeschooling their kids while juggling job responsibilities and stressed about going back to work and not having childcare. What I’ve done at Goodwill is to make sure the people who work for me know they are appreciated.

We submit what we call “Mission Moments,” letting the Board of Directors and senior leadership know what the team is doing, how much of it they’re doing and demonstrating their value. What I learned from my time deployed to Pakistan is that a supervisor needs to take care of their people because it could change the way they feel about you as a leader, and it could also change the way they feel about the organization. It’s my job as a supervisor to nurture my employees’ relationship with the company and to make sure their morale is cared for.

I would tell my younger self: “Trust that you know what you’re doing. Don’t second guess yourself. Usually your instincts are right.” As my younger self, I would say to me now: “Enjoy the ride.” I’m learning to practice that life is full of experiences, which are outside my control and to just enjoy the ride and what’s happening. And mixed within this idea, which also goes back to my younger self, I would tell me [regarding difficulties] “It’s going to pass. Time does pass.”

4. Did you ever have any doubts while in service? What did you do to overcome it? What do you do when you have doubts now?

Yes, I had some doubts, but that wasn’t until the end of my career when I decided to retire. I always said to myself, “If it’s not fun, don’t do it,” and I had fun all the way up until the time I retired. I used self-awareness and questioned some of my behavior, realizing that I no longer had that undercurrent of fun to me, that meant I needed to leave the military and do something different. I needed to get out of the way and let others step into my leadership role so they could grow. I still use that self-awareness today because when I notice I’m not being my happy-go -lucky self, then I know I need to either change or do something else.

5. Where was one of most interesting places you were stationed and why? What did you learn there?

I was deployed to Saudi Arabia twice, but the first time had the most impact on me not only because the buildings were so beautiful with all the colors, but the culture was interesting to me. I enjoyed learning about how they lived in Saudi Arabia, their customs, and comparing their differences to our way of life such as their beliefs about women. It was an opportunity to learn about and observe a very different culture without judging. I wanted to soak it all in and understand what I was experiencing even though some things were troubling to me such as their restrictions on women or the poverty of third country nationals who worked there. Living there was intriguing, but it was also a bit scary because there was always a chance to unintentionally do something that was culturally unacceptable.

The second time I was stationed in Saudi Arabia was different because there had been a terrorist attack at the Khobar Towers and security became incredibly tight. The threat level was much higher than before, and it was difficult to explore the local area and sights, such as an open-air market. I think after being in the military for a long time, to mentally and emotionally deal with potential threat, you develop a hard shell by focusing on the mission instead of the  location. My ability to focus is a trait that has probably helped during the pandemic, because I understand what needs to be done even in the face of possible danger. My focus then becomes how can I take care of the team to ensure they’re okay. Number one is taking care of your people and number two is to complete the mission. This strategy is something I still use today.