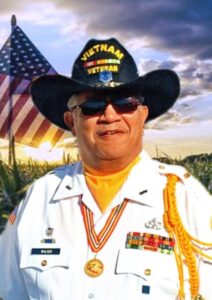 On Thursday, February 11th, the Heavenly Angels called our friend and brother Richard DD Walker home. As we say in the Disabled American Veterans, he answered his last roll call. I guess they needed a new choir member in Heaven’s big choir. This man will be sorely missed by everyone. As sad as this loss is for those of us who had the privilege of knowing Richard, our lives are richer for having known him. The world is a better place for having had him in it, though his time on earth was brief.

Rarely in one’s life do you have the opportunity to meet and get to know someone who checks all the boxes when it comes to human kindness. Richard embodied civility and decency. He was always caring for or caring about others. He was a man of integrity and one of the most honest, dedicated, and unselfish individuals you would want to know.

Richard was a respected and loved member of many veterans organizations throughout the Las Vegas valley, beginning with the Disabled American Veterans (DAV), where he served as Department Adjutant for more than 10 years. He was the a past DAV Department of Nevada National Executive Committeeman, representing Nevada as well as Arizona and Hawaii.

Richard was a member of the DAV Black Mountain Chapter 12, where he served as Chapter Commander, Adjutant and a member of the Chapter’s Elite Honor Guard. Richard was also a volunteer driver for the DAV’s Van Transportation Program for more than 14 years, logging many miles and transporting hundreds of veterans to and from their medical appointments.

He served on the Nevada Veterans Assistance League as the Director and was also a volunteer at the Nevada State Veterans Home in Boulder City. It is no wonder that with all of his accomplishments, he was the first ever recipient of the Governor’s Nevada Veteran of the Month award.

Richard not only served the veterans community, he also served the community where he and his wife Carolyn lived. Richard was a community Security Patrol Driver, as well as volunteering at his church as a member of the choir and bus driver for the congregation.

Richard exemplified all of the Morals, Values, and Principles of a true Masonic Brother. He was Past Worshipful Master of Alpha Lodge # 1 and a 33rd Degree Scottish Rite Mason.

To my brother and true friend, there are no words to describe your loss. I will miss you, as will all the others, whose lives on Earth you touched as well. Until we meet again, I will forever remain your brother and friend.