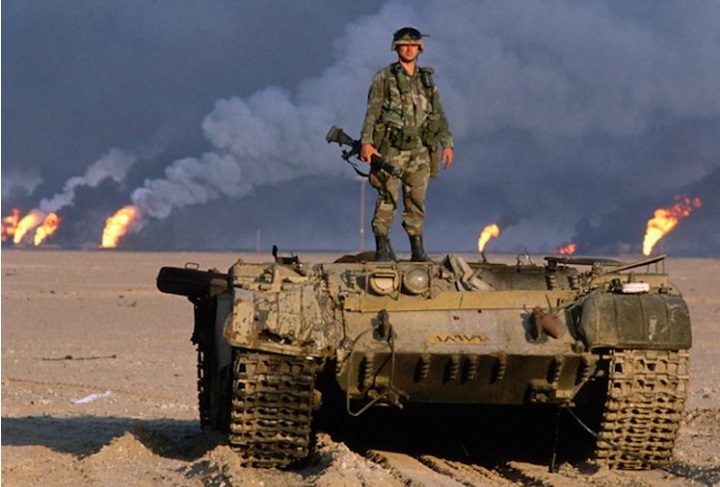 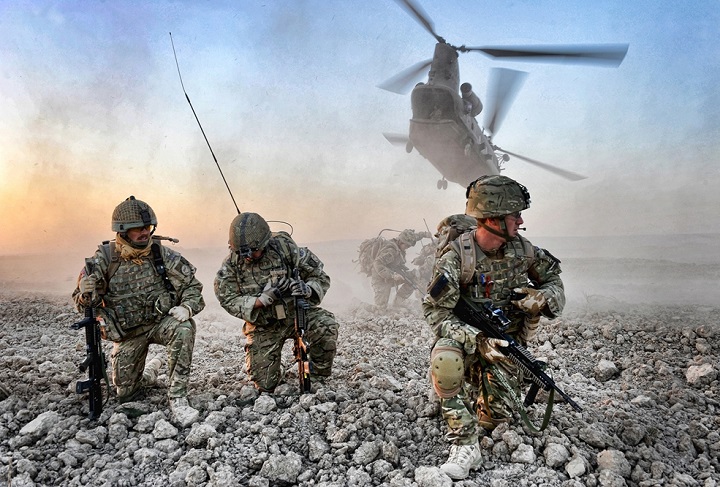 By Josh Loftis
They were deployed to the same country. Their target was the same man – Saddam Hussein. But they deployed years apart.

During the Cold War, the nation of Iraq was an ally to the Soviet Union. Because of this and rising tensions with neighboring countries in the late 1980s, the United States placed Saddam Hussein and Iraq on its list of State Sponsors of Terrorism.

Around that same time and into the 1990s, Iraq became increasingly aggressive toward the nation of Kuwait, which occupied land Hussein claimed belonged to Iraq.

Hussein complained Kuwait was exceeding its OPEC oil production quotas, lowering the cost of oil to around $10 a barrel. This resulted in an estimated $7 billion dollar deficit for Iraq each year. In the wake of the Iran-Iraq War, Iraq was trying to rebuild much of its infrastructure and considered this deficit the equivalent of “economic” warfare.

In July 1990, Saddam Hussein commanded 30,000 of his troops to the border. In response, the US Naval Fleet in the Persian Gulf was put on alert. As a result, Hussein believed many surrounding countries had turned to what he called “American policies” and there was a “conspiracy” against Iraq.

Iraq entered into talks with Kuwait, where Hussein demanded $10 billion dollars. Kuwait agreed to $500 million. This was unacceptable to Hussein and on August 2, 1990, Iraq invaded Kuwait.

Over the next several months, Saddam made many demands and proposals that were rejected by the U.S. and the United Kingdom.

On January 16, 1991, U.S. Military Forces started one of the most intense air raids against Iraq, lasting 42 days. Ground forces entered Iraq in late February, and by March 15, 1991, 540,000 troops had started moving out of Kuwait. Sheikh Jaber al-Ahmad al-Sabah was placed in power in Kuwait. It was 44 days from the start of the air bombardment campaign until a cease-fire was signed.

In total, there were 1,143 U.S. military casualties to include those killed in combat, deaths not in combat, and wounded.

Iraq continued to be suspected of State Sponsored Terrorism. The United States and its allies imposed many economic sanctions on Iraq in the years following the Gulf War in an attempt to contain the nation. The United Nations also imposed no-fly zones and sent inspectors to conduct ongoing inquiries into Iraq’s suspected acquisition of Weapons of Mass Destruction and a suspected alliance with the Islamic extremist group, Al-Qaeda. In August of 1998, Iraq halted all cooperation with UN Inspectors.

In October 1998, the United States Congress passed the Iraqi Liberation Act calling for the overthrow of the Iraqi government.

After George W. Bush was elected President in 2000, the United States became increasingly more aggressive in its foreign policy, especially as it related to Iraq, but there was not much formal movement toward aggression until after the September 11, 2001 attacks against America.

In October 2002, the United States Congress approved the “Iraq Resolution,” authorizing the President to “use any means necessary” to handle Iraq. In January of 2003, President Bush made the official declaration of war against Iraq.

This new generation of warrior faced things much different than the 1991 Gulf War. In 2003, they faced a large number of insurgents, loyal to the cause of Iraq, and with it came the use of guerilla tactics not largely seen before, including suicide bombings and Improvised Explosive Devices (IEDs).

The approach to warfare between these two groups of warriors was also different. The Gulf War was largely fought from the air and sea, and by tank while the Iraq War was an infantry war, with very different tactics. While the Gulf War was over in 42 days, the Iraq War lasted for almost a decade.

Despite the differences, there are also many things these two generations share. They deployed to the same region, faced similar environmental concerns and opposed the same government. They both had the intent to overthrow the abusive dictatorship of Saddam Hussein.

While U.S. military uniforms have seen some changes between the two conflicts, warriors from both conflicts wore the symbols representing the same “Stars and Stripes” as they did their part to sacrifice and protect America and its allies from terrorism and abuses against humanity. This month, we honor and thank them for their service and sacrifice.