Home / Super Delta formation of the Blue Angels and Thunderbirds

Super Delta formation of the Blue Angels and Thunderbirds 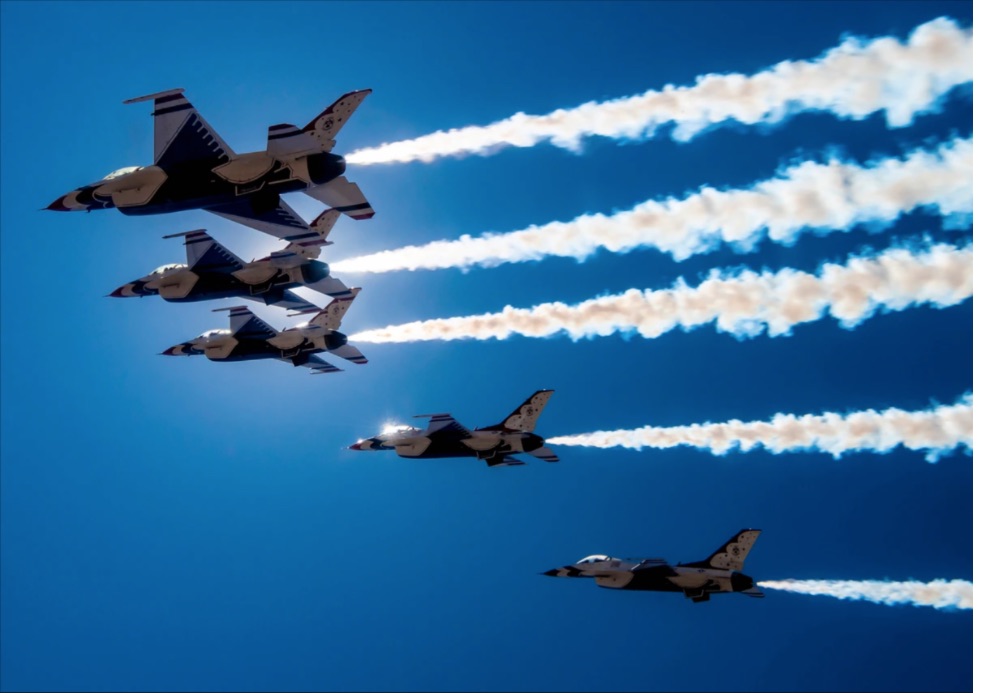 These Pilots Are Always ‘True Blue’ To Their Teams

(Nellis AFB) — The U.S. Air Force (USAF) Thunderbirds demonstration squadron, dressed in Air Force Blue, are known as America’s Ambassadors in Blue. The highly-trained pilots showcase the pride and precision of today’s Air Force. Millions have witnessed the Thunderbirds demonstrations. Each year brings another opportunity for the team to represent those who deserve the most credit: the everyday, hard-working airmen voluntarily serving America and defending freedom.

This year, one of the opportunities included a joint aerial performance with the Navy’s Blue Angels demonstration team. The “two blue” teams debuted a F-16 Fighting Falcon and F/A-18 Super Hornet flight formation known as the Super Delta during a joint training flight over the Naval Air Facility in El Centro, California. It was a preview of sorts for the teams to officially perform the maneuvers this coming Memorial Day weekend over national television networks.

The USAF Air Demonstration Squadron Thunderbirds are assigned to the 57th Air Wing, and are based at Nellis Air Force Base. Created 68 years ago in 1953, they are the third-oldest formal flying aerobatic team (under the same name) in the world, after the French Air Force Patrouille de France formed in 1931 and the United States Navy Blue Angels formed in 1946.

The Thunderbirds Squadron tours the United States and much of the world, performing aerobatic formation and solo flying in specially marked aircraft. The squadron's name is taken from the legendary creature that appears in the mythologies of several Indigenous North American cultures. When the team begins its takeoff, the team leader utters the words, “Thunderbirds, Let’s run ‘em up!” broadcast through the pilots earphones, and over a PA system for the viewers on the ground to hear.

The use of the F-16 in the joint operation is historically significant in that it has been the demonstration aircraft for the Thunderbirds since its 1983 season. It has undergone several modifications and designations as the F-16A, F-16B F-16C and F-16D. Some of the modifications include the replacement of the 20 mm cannon and ammunition drum with a smoke-generating system, including its plumbing and control switches; the removal of the jet fuel starter exhaust door; and the application of the Thunderbirds' glossy red, white, and blue polyurethane paint scheme.

One may wonder why demonstration aircraft are outfitted with weaponry. The fact is that Thunderbird aircraft are all modified from standard Air Force fighters, and can easily be returned to combat operations.

The U.S. Navy Blue Angels typically perform aerial displays annually in at least 60 shows at 30 locations throughout the United States and two shows at one location in Canada. The “Blues" still employ many of the same practices and techniques used in its inaugural 1946 season. An estimated 11 million spectators view the squadron during air shows from March through November each year. Members of the team also visit more than 50,000 people in schools, hospitals, and community functions at air show cities.

Since 1946, the Blue Angels have flown for more than 505 million spectators. Its mission is “to showcase the pride and professionalism of the United States Navy and Marine Corps by inspiring a culture of excellence and service to country through flight demonstrations and community outreach.” Its standard aircraft is the McDonnell Douglas F/A-18F Hornet, although it is also testing a Boeing F/A-18 Super Hornet.

The brand new air formation of the combined teams — dubbed Super Delta — will officially debut when they perform together during the Memorial Day weekend. According to a published description of the preview demonstration, on the upcoming holiday six Hornets will form a tight triangle and be flanked by three Fighting Falcons on each side. The official formation debut will be part of the National Memorial Day Parade, appropriately named “America Stands Tall,” scheduled for broadcast on ABC, NBC, CBS and Fox affiliates May, 29 through May, 31.

The parade — developed by the American Veterans Centers — is a moving timeline of American military history, honoring those who have served and sacrificed from the American Revolution to the present day. It draws on the tradition of Memorial Day parades, going back to the beginning of the holiday just after the Civil War, to create a family friendly event aimed at calling attention to the true meaning of Memorial Day – honoring the nation’s fallen heroes.

B.B. King was King of the blues, Levi Strauss & Co. marketed famous blue jeans and Blue Willow is a time-honored pattern for fine Chinaware. But the “Best in Blue” are the combined Ambassadors in Blue Thunderbirds and the Navy’s Blue Angels for consistently demonstrating the excitement, the precision, the professionalism and dedication of America’s military fliers. They exemplify the dynamic spirit of the combined colors of the nation’s Red, White and Blue.