VFW Post 36 Is Veteran Supporter of the Month – September 2019 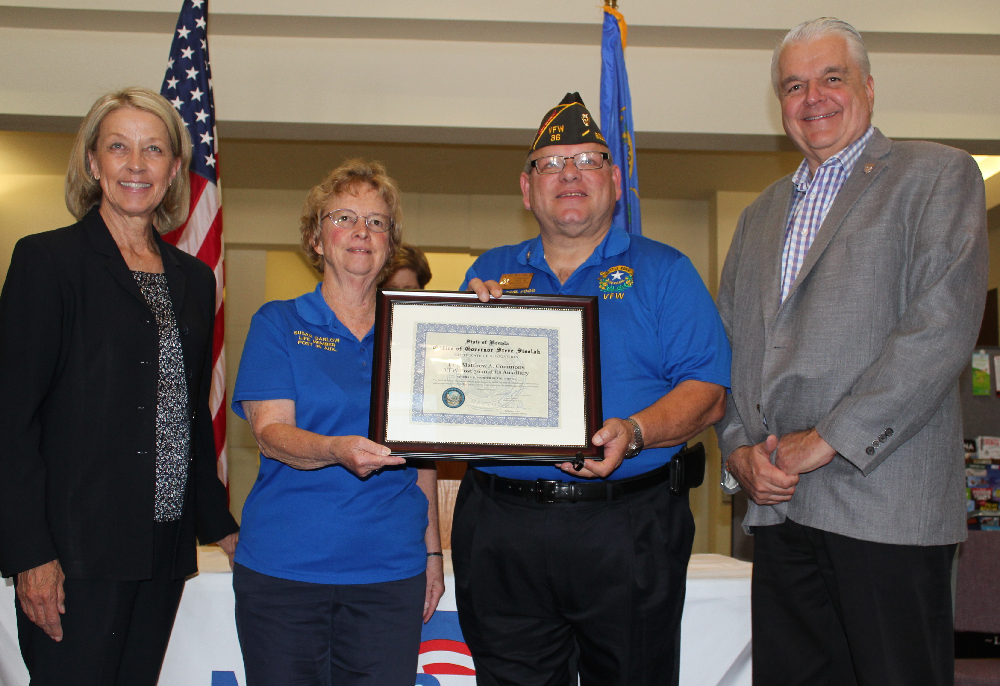 By Chuck N. Baker
Veterans of Foreign Wars, Cpl Matthew A. Commons Memorial Post 36 and its auxiliary were named Veteran Supporter of the Month in September. The group includes veterans as well as their spouses and family members. Members get involved and lend a helping hand wherever they are needed.

One day they’re volunteering at the Veterans Home in Boulder City. Later in the day, they’re helping others at the Department of Veterans Affairs clinic in North Las Vegas. The next morning it’s back to Boulder City to help out at the Veterans Memorial Cemetery.

A select number of Post 36 veterans make up an Honor Guard that officiates when needed at cemetery burials. While the Post Color Guard performs flag presentations at veterans’ events, members also provide presentations at other community events.

Post commander Carlton R. Fogg Jr. is not content to handle only one responsibility. In addition to commanding, he is also the post chaplain and the VFW District 6 chaplain as well. His credentials when joining the VFW are derived from his service in the United States Navy during the Cold War, 1978-1988. As a combat medic, he was stationed shipboard off the coast of Iran during the end of the hostage crisis in 1980. Iran had agreed to release the American hostages. President Jimmy Carter was leaving office, vacating the White House to President Ronald Reagan. The sailors were being kept offshore in case military action was required and rescue operations were ordered. “We were off the coast and ready to go ashore if needed,” Fogg said. He and the rest of the crew were awarded Navy Expeditionary Medals, which made them eligible to join the VFW.

Governor Steve Sisolak praised the group and acknowledge the importance of recognizing veteran supporters. “It’s always one of the highlights of my month” to present honors to veterans and their supporters, he said.

Secretary of State Barbara Cegavske was present. She told the attendees, “Being with all of you is icing on the cake.” She explained there are several veterans in her family and that her late father, William Jewson, was a Navy veteran who retired in Arizona. He has a veteran’s post named after him there.

The female side of the gang also keeps busy with many activities of its own. Fogg’s wife Auxiliary Treasurer Susan Fogg said her group serves on various veterans’ boards and committees and provides food and drinks on several holidays. “At Christmas, Easter and Thanksgiving we deliver food baskets to the needy,” she said. The auxiliary and other post members have adopted three military units. They are the Naval Operational Support Center, a wing of the Nevada Air National Guard and Coast Guard Security Unit 311. They also provide charitable funds to host Family Development Days and gather to fill and send Care Packages to deployed members.

For more information about the VFW or request a membership application, send an email to post36cdr@vfwnv.com.