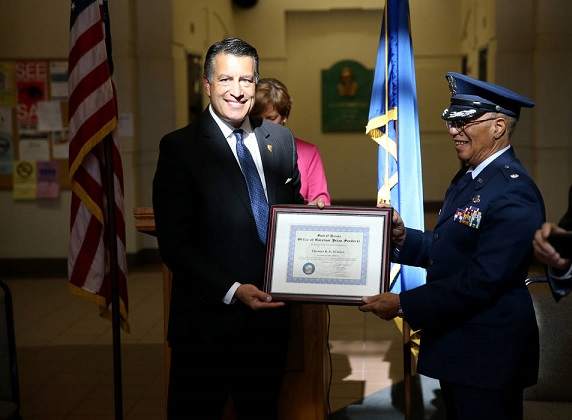 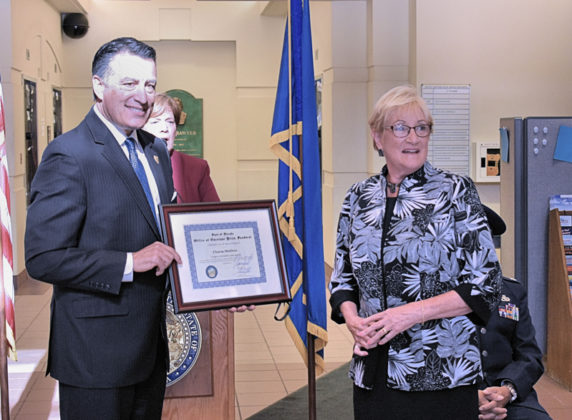 (Las Vegas) — Each month, the Governor’s Office honors veterans and a person or group that supports veterans who have gone above and beyond in their roles as volunteers and community leaders. In December, two familiar faces in the veterans’ community were added to this prestigious, elite group.

Pahrump resident and Air Force veteran Tom Waters received the Veteran of the Month honor and award in a special ceremony held in the lobby of the Grant Sawyer Building in Las Vegas. The retired Lieutenant Colonel is a member of the Disabled American Veterans, the Military Order of the Purple Heart, the Veterans of Foreign Wars and the American Legion, along with many other organizations. He founded the Veterans Finance Committee that disburses Nye County funds for select projects benefitting veterans. He also proposed legislation that became law creating the Nevada Silver Star and Bronze Star license plates issued through the Department of Motor Vehicles.

Kat Miller, Director of the NDVS, said veterans like Waters come home from service and continue to serve. She added when she wanted to understand veterans in Nye County, “All I had to do was call Tom” to gain that valuable insight. When presenting the award to Waters, Governor Sandoval said, “I really don’t have words for how much respect I have for you.”

The Veteran Supporter of the Month was awarded to Charm McElree. Over the years she has been and remains dedicated to promoting a program called “Operation Recognition.”  Many veterans of WWII, Korea and Vietnam were unable to complete their high school educations because they went off to serve in the United States military during a time of war, serving in one or more of those conflicts. “Operation Recognition” awards eligible veterans with high school diplomas they would have received had they not gone off to war. McElree is a former adult education teacher. She locates eligible Nevada veterans and assists them in filling out the required forms to apply for their diplomas. She also helps veterans who have moved here from other places to secure their diplomas from those out-of-state locales.

When she took to the podium, she told those in attendance that her husband, Bill, is supportive of her efforts and has “never begrudged me my mission. I’m married to a Vietnam veteran and I’m very proud of that.”  The latter comment received a round of applause. She then took a moment to introduce several individuals who had received their diplomas through her help and she thanked the Governor “for being there. It shows his sincerity and commitment.”

When it comes to helping veterans gain their diplomas, McElree never refuses to do the one “something” that she can do.