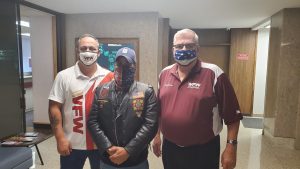 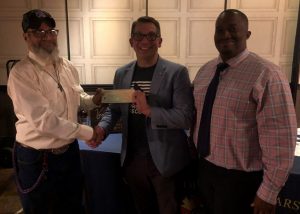 To say that 2020 was a difficult year would be an understatement for many. But for some, it was also a year that inspired renewal and reconnection as in the case of a local veteran from Northern Nevada who begin a new journey leading “Slim” Tiffany to travel 12,732 miles on his motorcycle across 21 states raising awareness and funds for Project Recover.

For Jesse, this started on a hot summer day in the middle of the pandemic when he and members of VFW Post 3396 rode to the Northern Nevada State Veterans Memorial Cemetery in Fernley for the funeral service of a finally recovered World War Two airman. This airman was 1st Lt. Lowell Twedt, who during World War 2, was shot down on October 20th, 1944 but whose remains were unable to be located until 2017 when wreckage pieces from of his P-38 were found.  Over the next few years, the Defense POW/MIA Accounting Office (DPAO) took the final steps to identify and confirm the identity of his remains. With this confirmation, Lt. Twedt was finally laid to rest at the Northern Nevada State Veterans Cemetery in June 2020. To Tiffany, the journey of Lt. Twedt and the lack of certainty about his fate was particularly touching.

Jesse discovered he had many points of connection with Lt. Twedt’s story. He is an Army veteran whose service saw him go from the sunny tropics, to the deserts of the middle east where during his last deployment he was injured and medically retired. However, even deeper than his connection through service, was the shared feeling of uncertainty Lt. Twedt’s family must have had when they were notified he was missing in action. For Jesse, he had experienced something similar after his service when on a fateful afternoon, he received a call from the Reno Police Department informing him his daughter could not be found. While the specifics and conclusions were different, as she was found safe and sound, the fear and uncertainty of whether his daughter would ever walk through the front door again is a feeling he would never wish upon anybody, let alone the family of a veteran.

While he was attending Lt. Twedt’s service, the memory of his daughter’s disappearance inspired him to learn more about DPAO and how Project Recover works with the office to locate and recover the remains of those counted in the rolls of the more than 82,000 missing in action/or prisoner of war service members.

His journey began in Sparks, where he spoke to members of his post, did research and finally set off from the Sparks Marina Veterans Memorial to help bring awareness to these service members and raise money for Project Recover.

On his journey, he hit many of the states south of I-80. At first, he went west to California then swung back around towards Texas, Florida and then up to Virginia. Over the course of the nearly 13,000 miles, he made many stops. He spoke at 15 VFW posts about the project, went to the POW/MIA Museum in Andersonville, GA and swung down to the Florida Keys and the VFW Veterans Village at Ft. McCoy, Florida.  All the while going out of his way to collect sand from each ocean and gulf that veterans had flown over to defend our nation.

As he began the journey home, Jesse made his way up to Virginia and over to the National VFW Headquarters at Kansas City, Missouri talking to groups, doing Youtube interviews, and saving a life or two.  As he beat back the strain and anguish of being rained on for the majority of his trip, endured being hit by a car, even outrunning two tornadoes, his resolve for his new journey never faltered.  Despite these challenges, he was succeeding in his cause, being interviewed several times by youtubers and speaking at various community centers, veteran’s posts, and the VFW Village about his journey, Project Recover, and why it’s important to bring these MIA/POWs home.

For Jesse, this journey allowed him to combine the therapy he gets from riding a motorcycle, with a cause he cares for and provide him with the opportunity to change the lives of many people he encountered along the way.

On May 14, 2021, he finished the first leg of the journey and was able to attend the 80th birthday anniversary of VFW Post 3396 where they topped it off with a small fundraiser that put together a bow for the $4,000 donation, he was able to help raise for Project Recover. This however is not the end, and he intends to go back out on the road in July to hit the rest of the Continental US and raise awareness and funds for Project Recover.

If you have a story about a Nevada Veteran doing something extraordinary, please send us their story to: pio.ndvs@veterans.nv.gov