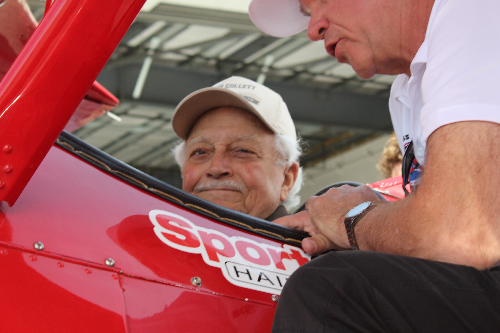 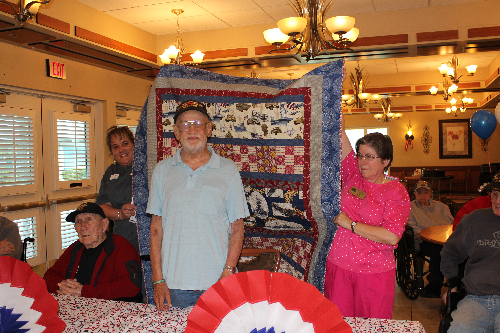 By Chuck N. Baker
(Las Vegas) — Boulder City has long been a town that honors the State’s veterans. It is the site of the Nevada State Veterans Home and the Southern Nevada Veterans Memorial Cemetery. Numerous ceremonies and commemorative events honoring veterans and military members are held there annually and this year is no exception.

On April 1, several local WWII veterans were honored by four organizations in two events over the course of one day. Honor Flight Nevada, Ageless Aviation Dreams Foundation, Quilts of Valor and the Southern Nevada State Veterans Home came together to recognize the service and determination of select veterans.

Honorees who were able were also given rides in an historic Boeing Stearman biplane. The rides provided flew out of the Boulder City Airport that morning. It was noted after WWII, thousands of such aircraft were destroyed, but the few that are left are still “great airplanes” and can often be seen flying in vintage motion pictures. The Ageless Aviation Dreams Foundation is a nonprofit organization established and dedicated to seniors and United States military veterans living in long-term care facilities who have always had a burning desire to “soar like an eagle.” The group provides opportunities to experience the thrill of flights riding in the cockpit of an aircraft used to train many military aviators in the late 30s and early 40s.

The stories of several of the veterans reflected their diversity and results-oriented personalities. “Jack” served from 1946-1948 and again in Korea from 1950-1953. “Alfred” served in the U.S. Marine Corps. Irma served from 1948-1952 and when she married, she said her wedding dress was made out of material from a parachute. Veterans Home Supervisor Linda Gelinger told those assembled in the hangar the gathering and plane rides, “Represent some fun and enjoyment to the veterans that have done so much for our country.”

After morning ceremonies at the airport, all involved moved across town to the veterans home for an afternoon of presentations that included an audience of dozens of residents living in the facility. Many of the residents were presented with their own Quilts of Valor. Carolyn Buhlmann of the organization said, “I had the honor of awarding 29 Quilts of Valor to what many call ‘Our Greatest Generation,’” living at the home. She said founder Catherine Roberts describes the quilts “as the civilian equivalent of a military service medal or award, such as a Purple Heart or Silver Star.” She said, “Our quilts are awarded, not just handed out …” adding “the top of the quilts, with its many colors, shapes and fabrics, represent the communities and many individuals that we are.” She explained the batting is the center, representing our hope that it will bring warmth, comfort, peace and healing to the recipient; the backing is the strength supporting the other layers, representing the strength of the recipient and the support of family and community.

Gelinger told the group the quilts are “a little token of everything you’ve done for us. You fought that terrible war, and we’re blessed that you’re here with us today.” A  youthful attendee at the ceremony, Boulder City resident and Girl Scout Abigail Panariso of Troop 844, was honored for raising $1,200 to buy new wheelchairs for some Honor Flight veterans. The recipients enjoyed riding in their new chairs — but for those who also had flown that morning, their minds were still thousands of feet in the sky soaring through sun-filled clouds, cherishing memories of their younger days.